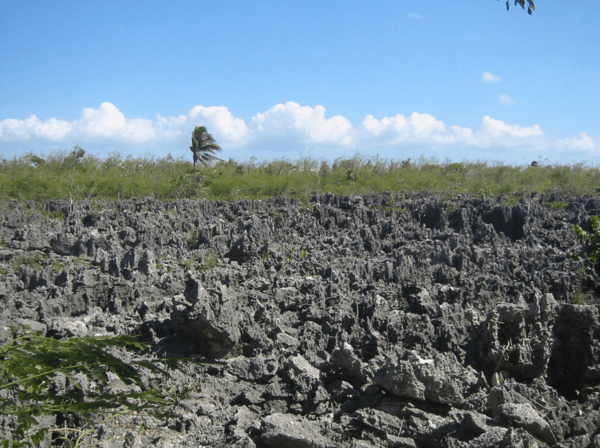 “Hell” is quite possibly, the most over-hyped tourist “attraction” in the Cayman Islands.

The only hell present is the realization that you wasted your precious vacation time staring at a quarter acre of rock in the hot sun.

Hell is a small iron-shore rock formation that only became famous due to it’s unusual name. Quick were the locals to cash in on selling post cards and t-shirts, forgetting that there is supposed to be something to back up the merchandise.

Hell is located in West Bay, which is about a 20-minute drive from George Town in Grand Cayman.

Countless hordes of cruise ship passengers are bussed to this location, adding to its un-charming atmosphere. If you are lucky, you may arrive without other people being in the premises, allowing you to stare at the rocks by yourself.

If you happen to be in the area already, then you might as well stop by for five minutes, but under no circumstances should you waste time visiting Hell by itself; some people may want to visit hell in Grand Cayman, but there are far more interesting things to do such as Stingray City or the bioluminescent bay.

How far is Hell from Grand Cayman port? The answer is about a 25-minute drive.

Most real estate in the Cayman Islands isn’t iron-shore based, but this is what makes “Hell” unique.

Hell is situated near the Turtle Farm, meaning that it may be worth visiting if you are already going to see the turtles, and have time to waste.

More interesting than Hell is the drive itself. Hell is located in West Bay, which is a local part of the island. Many tourists enjoy driving through West Bay to get a better idea of the more local areas of Grand Cayman.

Click the image below to see more Cayman Islands activities